Time to explore more of Aomori!

This is Kushihiki Hachiman-gu, which is located in Hachinohe, Aomori, and is designated as a National Important Cultural Property! This beautiful shrine was established as the religious center of the Nanbu region centuries ago and remains highly important to the region. Presently, their biggest festival is the Aki Matsuri (Fall Festival), where you can enjoy horseback archery and horse racing events.

The history of the shrine stretches back to the Kamakura Period (1185-1333) when the Nanbu domain controlled both Eastern Aomori and Northern Iwate (岩手県北部・青県東部). The shrine was built after the province of Nukanobu was given to Mitsuyuki Nanbu in return for his service in subduing the Oshu Fujiwara Clan.

Mitsuyuki Nanbu left his home in Kai Province (modern day Yamanashi Prefecture) and upon arrival erected a new Shinto shrine in the village of Kushihiki in Shinohe in 1222. This shrine was made to house a deity from his home province of Kai, known as Hachi Okami.

The main hall(本殿 honden) was built in the early Edo period around 1648. The main hall of the shrine is considered to be a valuable example of shrine architecture during the Edo period. Because of this, Kushihiki Hachiman-gu is now designated as National Important Property, along with the western gate of the shrine.

The Shrine’s grounds also houses a museum: The Meiji Kinenkan hall that houses several national treasures and is known as the oldest western-style building in Aomori prefecture. The national treasures include: Akaito-Odoshi Yoroi (armor lanced with red threads )and Shiroito-Odoshi Tsumadori Yoroi (armor laced with a white triangular patterned thread lacing). This armor is considered to be one of the best examples of samurai armor existing in Japan today.

This shrine is beautiful and honestly on my top three list in Aomori. The shrine itself is very impressive and has a bunch of other smaller shrines that are also apart of it! You start at the main hall and then you can walk around the back and along the way there are many smaller shrines. On each of the four corners of the main hall there are four large Yawata-Uma (I’ll talk about what these are in a bit), which look very old and a little worn down, and for that exact reason, I love them. Once you walk all the way around the main hall  on the right hand side there are two small shrines with a bunch of red torii. In front of the first one is a tree that has many gourds hanging from it.

These gourds are actually really interesting, and I tend to see them all over Hachinohe! So they must naturally grow in this region. The purpose of the gourd is to suck out evil and misfortune from you. After purchasing a gourd, you take off the lid, blow three breathes into it (with the intention of spitting out misfortune, disaster, and disease), close the lid quickly, and then either hang it up or take it home. The seeds in the gourds are thought to be preserved for many years so as the gourd hangs it is believed to protect you for many years while the seeds absorb and retain your misfortunes.

Have you ever seen or heard of a Yawata-uma (八幡馬)? These are cute knick-knacks to have around your house, but also have a really interesting history behind them! They represent one of the three traditional horses of Japan and originate in the Nanbu region!

Wait, did you say Nanbu?? That sounds kind of  familiar!

Why Yes I did, and You’re right!

The bodies of the Yawata horses are painted red, black, and white. These three colors make up the basic color scheme of the horses, but now a days there are also more original variations such as pastel. The horses are carved with a saddle which represents the folk tradition of the region where past brides were carried on horseback to their husbands houses. The elaborate patterns painted on the Yawata horses also represent the elegant costumes worn by the brides of the time. These horse toys are now over 750 years old. It is said that the wooden horses were originally made by farmers in the Meiji period to sell as souvenirs of the Kushihiki Hachiman-gu Shrine during its annual festival.

You can still buy a Yawata horse at the shrine as well as all over Aomori. The Yawata-uma also makes a marvelous wedding present as well as a gift to celebrate a brand new building!

View all posts by Iwaki Mama

津軽弁 Word of the Week

This word means ‘see you later’ in English.

The icicles on the light ❄️
It’s 🍎 season
Nebuta Matsuri is not only for adults! There are many types of lanterns carried by children during the festival like the ones you see here~~
At Hirosaki’s Nebuta Village you can try your hand at traditional hand crafts from around the Tsugaru region.✨You can even paint cute Nebuta goldfish!
You can experience Nebuta all year round at Nebuta Mura in Hirosaki ✨
In Hirosaki, Nebuta is always in the shape of a fan and will have a woman painted on the back.

Hiya! I’m Kate and I am a JET living in Hirosaki. 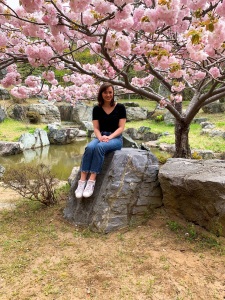